Menu
Log in
Register
Install the app
You are using an out of date browser. It may not display this or other websites correctly.
You should upgrade or use an alternative browser.

DirectAdmin v1.646 has been released

Trying to kill a backup task running flashes up in orange - ‘this is on a ‘datatasq’ this is ‘DirectAdmin’ ???

When selecting the user packages and clicking the "Export" button, nothing happens and no errors are shown (the reseller packages are working). 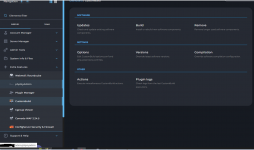 Code:
it should be

@fln
I can't create support ticket. Due it license from datacenter.

I want to convey the rays of hatred to the author of the v1.646 update, which came on Friday evening when I was drinking beer. The mail on three servers is broken!

It broke exim, because the hostlist relay_hosts was configured in exim by default (moreover, by DirectAdmin itself, not manually), and when removing relay_hosts support, no one thought of fixing these configurations automatically. EXIM worked, but the emails stopped going both ways. It took a while to figure out what the problem was and how to fix it.

Code:
Also changed the className from ".MainMenu" to ".main-menu" again, we had to redo the CSS customization. Tell me, was changing the character case and removing the hyphen in the name so critically necessary? I spent a lot of time because you just had to rename the tag.

Disgusting. The automatic update worked well at first. But now there are more and more problems with automatic updates. Apparently, there is no testing on real installations of the product.
E

ericosman said:
Why no *easy* autoconfig for outlook?
Click to expand...

Isnt there an option to do this automatic for new domains?

ericosman said:
Isnt there an option to do this automatic for new domains?
Click to expand...

Just follow the steps as mentioned in the doc and it will be set automatically for new domains.

I updated Awstats this morning, the log shows as

Updated on 1 server, just with only ./build update_versions and directoy got this notice

however the update still went without issues.

Why this notice?
E

@fln
On mobile in the custombuild plugin Dashboard / CustomBuild / Actions
It is missing the buttons to run any of them.
C

May I ask about the download speed of DA?
I remember previous versions of DA with very fast compression and download speeds of more than 50Mbps.
As of recent new updates, it's only 600.38 Kbps.
What issues affect such slow download speed can you point me out?
Thanks.